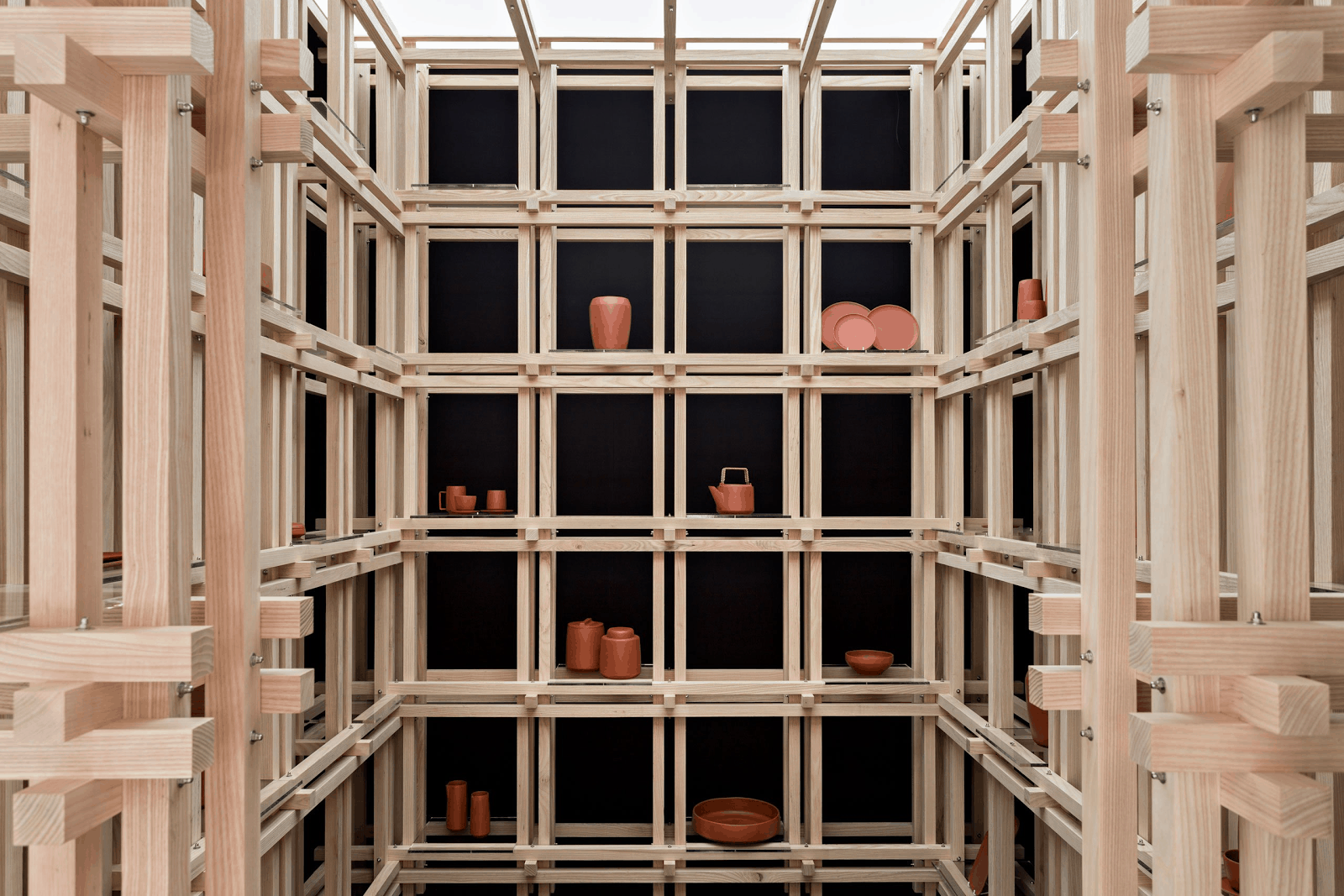 Amidst the thousands of designers that showed their furniture, lighting, and other home furnishing products, one particular collection caught our eye. Christopher Jenner, a London-based award-winning designer from South Africa launched his “Tea House” collection, a contemporary homeware collection that uses Zisha clay from the eastern Chinese province of Jiangsu, in collaboration with Yixing Ceramics. The complete collection includes tea service plates, jugs, vases, and bowls, all using fired Zisha clay. 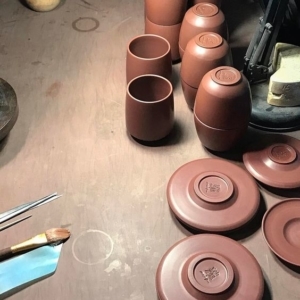 The use of Zisha can be traced back thousands of years to the Northern Song Dynasty, approximately 960-1127 AD. In speaking with Daniel Chen of the Gardiner Museum, Canada’s national ceramics museum, we gained some insight into this centuries-old practice. Zisha, which means “purple sand,” derives its name from its initial purple colour, which is a result of the high iron content in the clay. It is fired into stoneware at 1100-1200 degrees Celsius (2012-2192 Fahrenheit), and typically left unglazed. Once fired, the clay reacts to the heat of the kiln, changing the final colour of the clay.

Since the Northern Song Dynasty, the teapots using Zisha clay have been lauded as one of the best for tea brewing – the clay is said to absorb and retain the flavour of the tea, producing a more complex flavour profile over time (it is best, therefore, to only brew one type of tea in a pot, as well as wash it with water only).

This mix of ancient Chinese techniques with modern design is not unusual to Chinese ceramics practice, as the use of traditional practices with contemporary design is not uncommon in Chinese history.

“I wanted to create a collection that was both relevant and functional.” – Christopher Jenner

Jenner spent a substantial amount of time in China, immersing himself in this ancient craft, gaining unique insight into the traditional material and processes as he worked alongside local artisans. His contemporary Tea House collection uses Eastern China’s famous Zisha clay, which can be traced back hundreds of years, though he asserts the mixture of contemporary design with ancient materials was not wholly intentional from the start. “I had no idea Zisha clay was such an iconic material. Only once I got into the project and did my research did I start to realize just how central Yixing-ware is to Chinese heritage and craft.”

Jenner believes the word contemporary is a bit of a misnomer, wanting rather, for the collection to be viewed from a functional perspective, connected more to where the world is at at the moment, and less focused on design or trend. He hopes to honour this material and craft as part of its thousand year history, stating, “Since my first introduction, I was captivated by its natural resonance, and tangible beauty. As such, I wanted to create a collection that was both relevant and functional, a tight edit of pieces that fit perfectly into the post-consumer society where the values of a product can be found in heritage, craft, and beauty.”

“Essentially most of design is pointless… the notion of beauty, the pleasure of relationships, the treasure of craft, and the curation of culture are the values that justify the purpose.” – Christopher Jenner

Pieces from the Tea House collection

As for the creation process, it begins at extraction, in a rock-like clay, crushed and mixed with water which is then sorted into various grades of malleability. He states of the process, “Yixing Ceramics are created in a repertoire of techniques and processes, each piece evaluated in relation to its form and shape. More complex pieces are made through slip casting while round organic forms are crafted on the wheel. All appendages, handles and spouts are hand-applied.”

The length of time to create each piece, Jenner claims, varies depending upon the technique required, “However, they all go through an extensive finishing stage where they’re ‘polished’ to achieve that unique Yixing resonance.” Once the pieces achieve the ‘dry’ stage, they’re fired, which can last from 24-48 hours; a process which greatly affects their texture and colour.

Jenner’s collaboration with Yixing Ceramics was born out of a desire to regain the functional relevance of traditional crafts in the western world. He reveals, “We wanted to take what we’ve been doing in Europe and look outside our comfort zone, to explore other cultures and their relationship to craft – how do they engage with their heritage and how does it define them?” Once the collaboration with Yixing Ceramics was solidified, he realized that not only was there a wonderful opportunity to bring special awareness to Zisha Clay in the West, but also an opportunity to redefine how the material is viewed in its home country. “Since the 9th century, all of China’s Emperor’s drank their tea from Zisha clay,” he comments, “the material provides a superior brew and a level of ritual seldom experienced in modern life.”

The collaboration with Yixing was also an opportunity for Jenner to showcase the artisans behind the collection, featuring pictures of them on his Instagram. When asked why, Jenner maintains that human relationships give design it’s ultimate purpose. “As a designer you have to ask yourself why you do what you do? Essentially most of design is pointless, it’s therefore important to add layers of meaning and purpose to one’s work and life. For me, the notion of beauty, the pleasure of relationships, the treasure of craft, and the curation of culture are the values that justify the purpose.”

As for advice for those who are looking to purchase a piece of the collection? Jenner suggests a holistic approach to caring for the ceramics. “Owners of Yixing Ceramics curate their pieces around their lives. They have favourites for various occasions and events. The clay by its very nature changes over the course of a lifetime – simply treasure yours in the same way you do the other things you love.”

With an emphasis upon honouring the material and craft of Zisha clay within a post-consumer society, Jenner’s collaboration with Yixing ceramics introduces functional heritage pieces that are both sophisticated and timeless.

For more Yixing ceramic ware that displays the breadth and scope of Zisha clay, Chen suggests checking out the K.S. Lo Collection, housed at Hong Kong’s Flagstaff House Museum of Tea Ware. If you’d like to see some Chinese and Asian ceramic work locally, the Gardiner Museum houses some pieces such as Hwang Jeng-daw’s “Kissing Jackson” (above, left), and Richard Notkin’s “Ellipsoidal Teapot: Natural Selection” (above, right). The Gardiner Museum is also the home of one of the world’s best collections of Japanese and Japanese-inspired European ceramics.

The collection will be available for global purchase at the end of May from www.yixingceramics.com 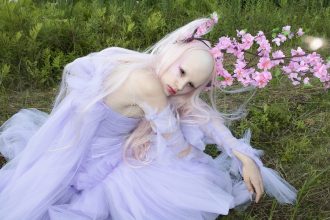 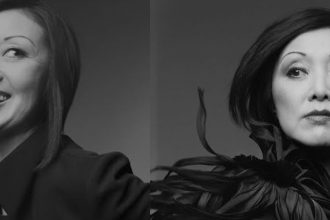