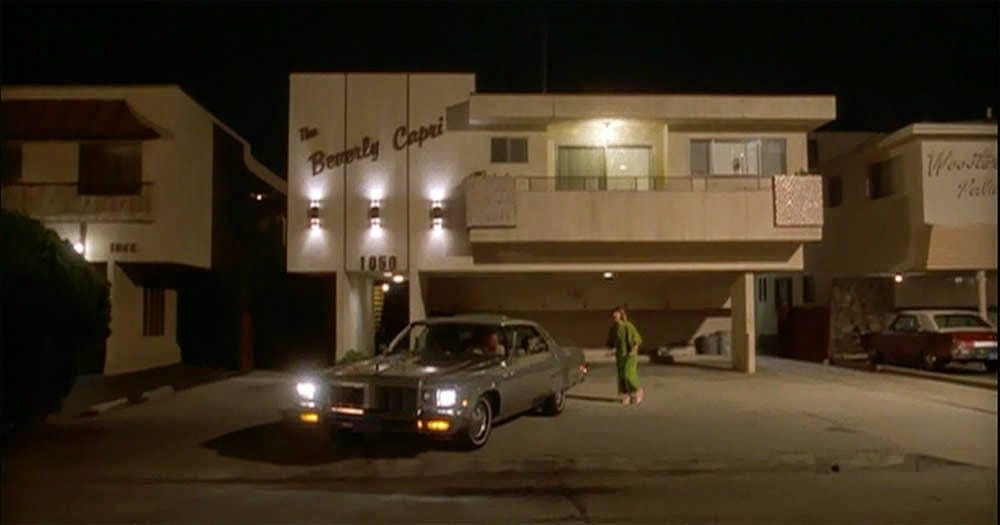 An Ode to the Los Angeles Dingbat

The dingbat – a boxy, two or three story apartment that includes sheltered street-front parking known for its lowbrow architectural status and inexpensive rent – is the chosen backdrop for the 1998 American comedy film, Slums of Beverly Hills. The film is a period piece that tells the story of a nomadic family perpetually searching for accommodation (and skipping out on overdue rent) within the coveted Beverly Hills school district. ‘Furniture is temporary, education is forever,’ he explains Murray Abramowitz (Alan Arkin) when his kids ask why they have to abandon possessions while sneaking out in the middle of the night.

Thief’s in the night: The Abromowitz’s speed away from The Beverly Capri as their landlord chases them down demanding they pay outstanding rent. © 20th Century Fox.

The film follows Vivian Abramowitz (Natasha Lyonne) as she comes of age in the flatlands of Southern California under the care of her father Murray – a struggling car salesman who is continuously late with paying rent. When the outstanding rent add’s up, Vivian and her family pack into the family station wagon and hightail it to the next dingbat – a humble dwelling with aspirations to be something greater. the families aspirations for good education and upward mobility are paralleled by continuous and aimless wandering around the mansion-lined streets of beverly hills searching for their next abode. The film’s comedic plot is enhanced by the incidental pleasure of viewing the Los Angeles dingbat as the backdrop to Vivian’s story. 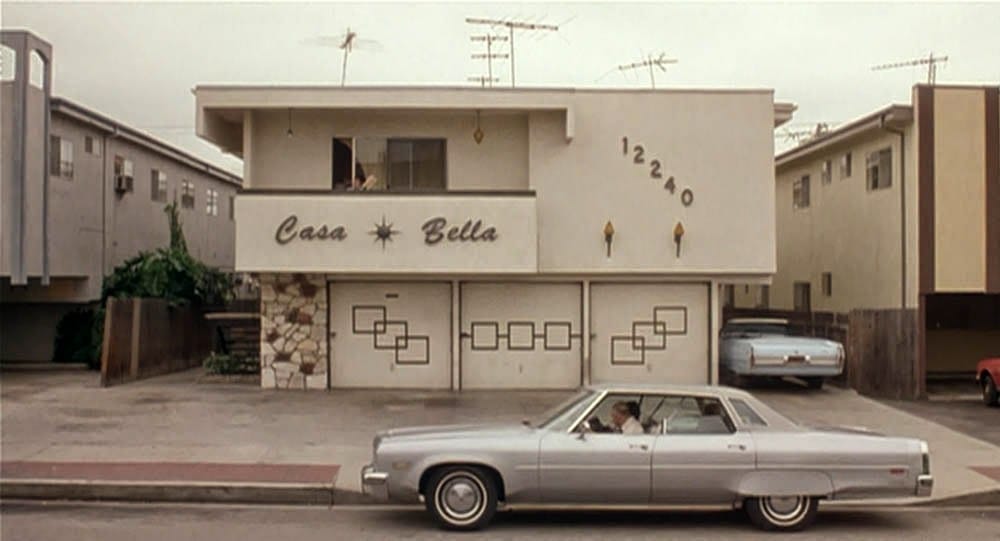 The term ‘dingbat’ first registered in popular consciousness through Reyner Banham’s 1971 book titled Los Angeles: The Architecture of Four Ecologies. Stucco’d cuboids containing one or two bedroom units, the structures are are often used as temporary homes for underprivileged inhabitants. Dingbats often have a name applied to the face of the building in cursive writing that promises prosperity, but delivers a kitschy backdrop to the lives of their inhabitants. Words like ‘Villa’, ‘Chateau’, ‘Estate’, ‘Chez’ and ‘Manor’ are often part of the grand names applied to these modest buildings. Welded into the dingbat’s design are feelings of ambition, desire and the eagerness to dream. Their form mimics high-modern architecture, and all things that might attract an urban dweller to the city of Los Angeles – clean midcentury lines, bright colours, and palm trees. 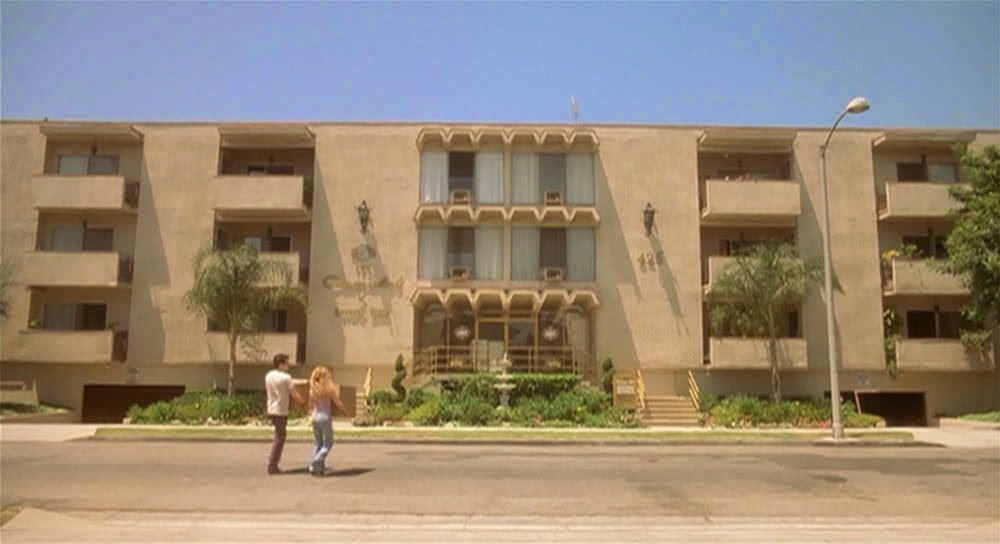 Fitting in with the L.A. sterotype, the dingbat shares something common throughout the Los Angeles built environment. Like the drive-in, strip-mall, gas station and freeways, it was built with the automobile in mind. “The format is essentially an inhabitable parking structure, with two or three stories of living space sheltering a ground-level carport.” says Lamar Anderson in ‘Will the Los Angeles Dingbat Finally Get Its Due’?

“Those dingbats are so poignant. So beautiful and heartbreaking. Little temporary homes for the underclass like tenements with fanciful aspirational names extravagantly drawn on the front like hotels. They break my heart, those buildings.” – Tamara Jenkins, writer/director of Slums of Beverly Hills.

The dingbat is in danger of extinction. In the city plan for Sarasota, Florida, adopted in the year 2000, included images of buildings found within the city. The only building type singled out as undesirable was the dingbat. In 1999, the northern California city of El Cerrito published a masterplan that noted “Older ‘stucco box’ apartment buildings will be replaced with more up-to-date and better quality apartments and condominiums.”, marking the dingbat’s days as numbered.

Heidi is the president of Matte PR and a mentor with Toronto Fashion Incubator. She’s inspired by brutalist architecture, sculptural fashion, and Italian“Giallo” films. Influences include John Waters, Yoko Ono, and Suzy Lake. 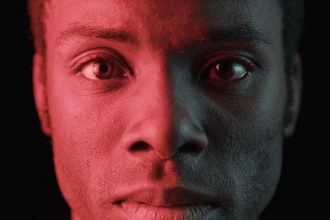 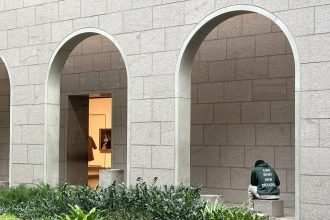 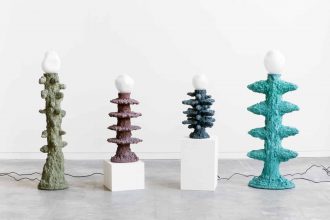